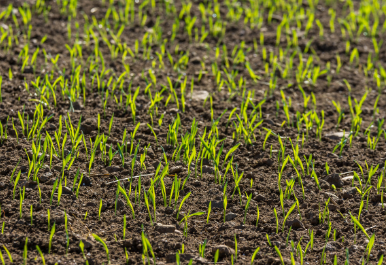 Conditions since the first week of October have been difficult to say the least, with heavy rainfall and very tight weather windows providing limited opportunities for sowing. The dry spell we were promised never really materialised but tillage farmers are a resilient bunch and in spite of the circumstances, a significant amount of winter plantings has been completed. We have had to adapt with a lot of the later crops being drilled with power harrow combination drills directly behind the plough.

Winter oilseed rape crops are looking good in general. Due to the late harvest, acres sowed aren’t massive but anyone that did risk the later plantings is pleasantly surprised. Many crops weren’t sowed till the 10th -15th of September which would traditionally have been seen as too late but there was plenty of moisture and warmth in the ground this year and crops have established very well. The use of hybrid varieties has worked well in the later planting slots and have proven their worth. Volunteer cereals have been an issue due to the difficult harvest conditions and most have been treated with a graminicide to tidy up volunteers. Pre emerge herbicide has worked well also with good chemical up take in the target weeds. Crops will need to be treated with a fungicide for light leaf spot and some foliar boron when at the 4-6 true leaf stage probably around mid-November. Crops that weren’t treated with pre emerge herbicide or that have grass weed issues will need to be sprayed with Kerb Flo or Astrokerb when temperatures drop below 12 degrees Celsius.

Plantings of winter wheat have increased significantly on last year with a mixture of early and later sown crops. The two main varieties sown are Graham and Costello. Many growers especially on more difficult soils took advantage of favourable conditions in late September. These crops have established excellently with almost 100% germination. Crops sowed in late September will be at risk of BYDV and will need an aphicide when at the 3 leaf stage and possibly a follow up treatment approximately a month later. Aphid counts are variable and we are still slightly in the dark as to the relative proportion of resistant aphids in the local population. The advice must be to err on the side of caution and avoid spraying with a pyrethroid insecticide until at least 3 true leaves on crops to minimise damage to beneficial insects that feed on aphids in the target population. Later sown crops were sowed in some marginal conditions and they will be at risk of slug damage so growers will need to keep an eye on the emergence of these crops. There is still time to sow wheat if conditions allow but be mindful to increase seeding rates as the season moves on. It is also prudent to ensure seeding depth is deeper than a crow’s beak at this time of year.

Winter barley plantings are also up on the whole and many crops have been sowed into good quality seedbeds. There is a vast choice of winter barley varieties on the market this year with LG Casting, Valerie and Cassia two rows proving popular with the hybrid six row Belfry and 6 row conventional KWS Kosmos popular in more difficult fields. There was a limited supply of the new BYDV tolerant variety KWS Joyau to the market this year and we will wait with eager anticipation to see how this variety performs. Plant breeding and not chemistry may be our best weapons against plant pathogens in the future. As with the wheat similar advice applies for aphicide applications. Most crops were treated pre emerge with a combination of Flufenacet and DFF and this was very important for grass weed control. Any crops not treated will need to get a post emerge treatment of Tower and DFF before annual meadow grass tillers to control it. It is essential to treat winter barley for grass as soon as possible in Autumn as there is no spring treatment available anymore.

Winter oat plantings are holding steady with the two main varieties of Isabel and Husky going in. Oats aren’t generally sowed till after the 10th of Oct so there is still plenty of time to plant Oats if conditions allow. They are both spring varieties planted in the winter so earlier sowing will present more problems than solutions with disease and growth regulation. Aim to plant oats at 12 stone 200 kg per ha at this stage of the season to insure a strong plant stand. Isabel is more suited to coastal areas as it has a very good rust resistance profile while husky is a hardier variety so will prove more suitable more inland where winter frost is a higher risk. Winter oats generally don’t require an Autumn herbicide but crops who may be in fields with annual meadow grass issues can be sprayed pre emerge with DFF @0.25L/Ha. 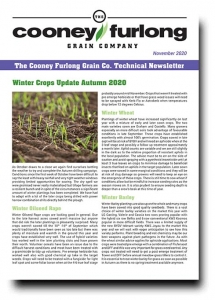 Best practices when drying off cows

Any cookies that may not be particularly necessary for the website to function and is used specifically to collect user personal data via analytics, ads, other embedded contents are termed as non-necessary cookies. It is mandatory to procure user consent prior to running these cookies on your website.